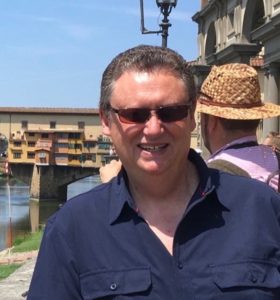 Will Garrett-Petts is Professor and Vice-President, Research (Interim) at Thompson Rivers University. He is former Research Director of the Small Cities Community-University Research Alliance—a national research program exploring the cultural future of smaller communities. He was Associate Dean of Arts, Chair of English at TRU for five years, and, before that, Chair of Journalism. His recent books and catalogues include Artistic Approaches to Cultural Mapping: Activating Imaginaries and Means of Knowing (Routledge); Cultural Mapping as Cultural Inquiry (Routledge); Whose Culture is it, Anyway? Community Engagement in Small Cities (New Star Books); Writing about Literature (Broadview Press); Imaging Place (Textual Studies in Canada); Artists’ Statements and the Nature of Artistic Inquiry (Open Letter); The Small Cities Book: On the Cultural Future of Small Cities (New Star Books); and PhotoGraphic Encounters: The Edges and Edginess of Reading Prose Pictures and Visual Fictions (University of Alberta Press). He is currently engaged in exploring questions of visual and verbal culture, cultural and vernacular mapping, and the artistic animation of small cities. He also has a special interest in the theory and practice of including students in undergraduate research. For an archived catalogue detailing earlier research/creation collaborations at the Banff Centre, Click on LINK: MAIVBookFinalJuly09

Recent invited presentations and keynotes include

(2017) “Defeating Authorship: Revisiting the Museum of Jurassic Technology.” Panel presentation (with Emily Hope) at the Arts in Society Conference, American University of Paris.

(2017) “The Role of the Epideictic in the Rhetoric of Vernacular Mapping.” Panel presentation at Cultivating Capacity, Creating Change, the Conference on College Composition and Communication Annual Convention, Portland Oregon.

(2015) “What are the Positive/Negative Aspects of an Artist Engaging with Communities in Long Term Projects vs. Short Term Interventions?” Publication emerging from the Spectres of Evaluation Keynote in The Questions We Ask Together. Ed. Gemma-Rose Turnbull. Minneapolois, MN: Open Engagement in Print. 208-212.

(2014) The Rhetoric of the Project: Art at Work and Artists as Workers. Keynote Presentation. Spectres of Evaluation: Rethinking Art/Community/Value, Centre for Cultural Partnerships, University of Melbourne.

During the last 20 years Garrett-Petts has secured over $5 million in sponsored research, he has written and edited 17 books, authored 47 book chapters and articles, curated 5 art exhibitions at major regional galleries, directed a major international residency, directed or co-directed 6 video documentaries and over 30 podcasts, and delivered over 80 conference papers and workshops (including 21 invited and keynote addresses), and hosted over 30 town halls and community planning meetings. In addition, he co-edits a new series on Small Cities Sustainability Studies in Community and Cultural Engagement for the University of Calgary Press.

His research highlights include

Principal Applicant and Director of the Mapping Quality of Life and the Culture of Small Cities CURA, 2006 – 2012 (SSHRC CURA Program). The research program brought together 26 university researchers and over 30 community partners. Our research team has to date produced 18 books, over 50 journal articles and book chapters, over 60 conference presentations, 51 podcasts, 2 documentaries, and 6 conferences. A key aspect of this CURA was the work of our artist-researchers (nine artists working with interdisciplinary teams and community partners). The CURA’s body of research has recently formed the basis for inclusion of “Community and Culture” as one of the five themes in TRU’s Strategic Research Plan.

Principal Applicant and PI for the “Artist Statement: Making Interdisciplinary Inquiry Visible,” 2010-2014 (SSHRC SRG program). Together with nine collaborators (all noted artist-researchers), he has been exploring the impact of university-based artists and artist-researchers on the work of interdisciplinary research groups. This work has received significant international recognition and, since completion of the grant, has led most recently to the co-organization of two international research symposia and a series of workshops on cultural mapping at the University of Coimbra, Portugal; and that collaboration has in turn led to the publication of two refereed books that Garrett-Petts co-edited: Whose Culture is It, Anyway? (New Star); Cultural Mapping as Cultural Inquiry (Routledge).

Senior Faculty and Principal Organizer for the Making Artistic Inquiry Visible (MAIV) Residency, a six-week creative think tank facilitated and funded by the Banff Centre, May – June, 2008. Emerging out of a 2005 SSHRC-funded workshop organized by Garrett-Petts as PI, Artistic Inquiry and the Role of the Artist in Academe, the residency brought together an international gathering of 28 artist-researchers, curators, and critics, allowing for the collaborative exploration of how artistic inquiry contributes new forms of knowledge inside and outside of the academy. In addition to four public lectures, weekly workshops, and a culminating exhibition, the residency also produced a social network website and an electronic publication entitled Making Artistic Inquiry Visible: Reflections and Conversations (The School of the Art Institute of Chicago, 2009).

Curator and Co-editor (with Rachel Nash) of Proximities: Artists’ Statements and Their Works (2005, Kamloops Art Gallery) a six-week exhibition with accompanying catalogue, panels, curatorial talks, and video production. The exhibition was fashioned as a collaborative exploration of artistic research and artists’ statements as art; the panel, talks, and two resulting books (one refereed) interrogated the premise that “art speaks for itself.”

Co-author and co-curator (with Donald Lawrence) for PhotoGraphic Encounters: The Edges and Edginess of Reading Verbal and Visual Narratives. Edmonton: University of Alberta Press, 2000, and the accompanying six-week exhibition at the Kamloops Art Gallery, October – November 2000. Emerging from work on an edited collection Integrating Visual and Verbal Literacies (1996, Inkshed Publications, U of Manitoba), and supported by a SSHRC SRG, the book was nominated for three awards and reviewed favourably in such journals as Canadian Literature, The Edmonton Journal, West Coast Line, Artichoke, and the local/regional press.

Throughout my career as a Canadian Studies specialist, discourse analyst, and writing teacher, I have balanced administrative responsibilities with editing, teaching and research: I was co-founder and co-editor of the academic journal Textual Studies in Canada; and currently serve as Series Editor with University of Calgary Press, for monographs and multiple-authored works on community and cultural engagement in small Canadian cities. I have developed and taught an array of Canadian literature and Canadian special studies courses over the last 20 years; and my research program has produced, to date, 18 books and catalogues, 47 book chapters and articles, 5 art exhibitions at major regional galleries, 6 video documentaries and 30 podcasts, and over 80 conference papers and workshops (including 21 invited and keynote addresses), 7 national and international conferences, and 30 town halls and community planning meetings associated with my work on cultural mapping and community-engaged research.

In addition, I have chaired two departments, developed programming in both English Studies and Journalism, served as Associate Dean for the Faculty of Arts, and currently have principal leadership responsibility for the development and promotion of research and graduate studies at my home university. Perhaps more importantly, the collaborative nature of my teaching and research program, including my work as a research director, editor, and conference organizer, has linked me to an extensive national and international community of interest and practice involving over 60 scholars, including research collaborators at the University of Coimbra.

A literary critic and discourse analyst by training, I have an established record in inter-arts research and publication, with a focus on Canadian literature, Canadian visual art production, and, more recently, on cultural mapping and the artistic animation of small Canadian cities. My doctoral work took up the proposition that a number of contemporary Canadian writers—in particular, Robert Kroetsch, Margaret Atwood, George Bowering, and Daphne Marlatt—have developed a “rhetoric of reading” that positions the reader as a co-participant in the creation of meaning.

Upon completion of my PhD, this interest in expanded notions of “reading” extended from print to visual texts, resulting in the publication of PhotoGraphic Encounters: The Edges and Edginess of Reading Prose Pictures and Visual Fictions (a study of the intersection between Canadian literature and Canadian photography). Here, with co-author and visual artist Donald Lawrence, I explored what we called a “new visual/verbal vernacular” for Canadian literature, where visual, verbal and oral modes converge. We argued that the oral vernacular is shown to find its textual expression in the visual inscription of key texts, rather than in merely linguistic terms. We showed how what might otherwise be lost on the printed page—for example, the accent, the local cadence, and personal inflections as reminders of a grounded experience—can be recuperated and integrated through the visual idiosyncrasies of textual production and presentation. In brief, we insisted that, for certain Canadian art forms, the act of viewing should become an essential part of the act of reading.

This interest in multiple literacies and alternative forms of reading led to extensive work on the study of “artist statements,” what artists say and write about their work. With my research collaborator Rachel Nash, I published two books, co-curated a major art exhibition, and hosted an international research symposium on the intersection between artistic research and the role of artist statements in visual arts culture.

More recently, and following Lefebvre’s admonition that “every discourse says something about space (places or sets of places),” my research focus has dilated further to embrace the reading of Canadian social geographies and cultural mapping—yet another meeting place of the visual and the verbal. Two of my co-edited books, Cultural Mapping as Cultural Inquiry (2015) and Artistic Approaches to Cultural Mapping (2019), engage the narrative potential of cultural mapping.

Cultural maps seek to combine the tools of modern cartography with vernacular and participatory methods of storytelling to represent spatially, visually, and textually the authentic knowledge and memories of local communities. In contrast to conventional maps, cultural maps assert that local inhabitants possess expert knowledge of their environments and can effectively represent a socially or culturally distinct understanding of landscape that includes information excluded from mainstream or official maps. I’m especially interested in the work of artists-turned-municipal cultural mappers, those who employ their artistic practice to what Shannon Jackson calls “social work” by enabling new forms of participatory community planning and local identity formation.